I recently finished reading a blog of a man that moved from Virginia Beach to rural Virginia. He spent two or so years cataloging his transition, monthly. I enjoyed the similarities in his experience and my own to the point where I envisioned him as a male version of myself in an equally quaint parallel universe.

Two stark contrasts stood out, however:

1.When he moved in to the area, he had a parade of neighbors, carrying pies, coming to welcome them. In our case, after two months, I bumped in to a neighbor who asked with complete indifference, “Y’all put up a fence, guess you’re stayin’?” Needless to say, we never received any baked goods.

2. When he and his wife moved out in to the country he compared themselves to Steve Irwin and spoke fondly of their affection for nature. By the end of the blog they were running a business raising goats for meat and talking about plugging the dead animal’s anus in order to not spill excrement during slaughter.

I am always intrigued by paradigm shifts such as this. When did a goat stop being something adorable and sweet to something to make money and eat?

Here is a picture of two of their baby goats, that I stole from his blog (it is hard to find anything cuter than a baby goat)- 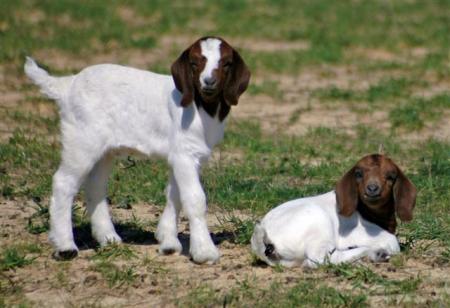 As a vegetarian, I am okay with other people eating meat. I don’t agree with it but that is why I don’t put it in to my body. If I could speak candidly though, I believe that if the majority of people had to raise those two goats for slaughter, they might choose vegetarianism also.

I had a co-worker, once upon a time, verbally berate me for choosing to raise my children to not eat meat. She actually said that I had no right to do so. Of course, she suffered from a shopping addiction and had a closet full of clothes with the price tags still on them. I have contact with her adult daughter now, and guess what she talks about on a regular basis? Yes, the sales going on at various stores. As parents, we all teach our children our morals and values wittingly or unwittingly.

Since moving to the country I have had a handful of opportunities to quiz people on their feelings about raising animals for consumption. My thought is, if a society was brought up eating a plant based diet they would be repulsed by the introduction of meat. Similarly to how we, as Americans, feel about Asians eating dogs or cats. We weren’t raised to find this act acceptable and therefore, we are disgusted by it. Regardless of the fact, that the man in China, who has eaten this delicacy for years, finds it appetizing.

This isn’t my opus extolling the virtues of vegetarianism, however. It is, sincerely, a collection of a couple of stories with a theme of compassion vs. detachment and all spawned from the blog of a couple, who loves animals, but chooses to slaughter goats. (I actually tried to email him, about a month ago, but have yet to receive a reply.)

My email to the blog man wasn’t full of words of reproach. Simply a question of how you get from Point A to Point B. My personal assumption is one that people, generally, feel guilty about eating animals. I don’t say this with any condemnation. Know that I would be a hypocrite if I judged anyone for what they are putting in their mouth. I eat dairy products and egg products both which are taken in an equally cruel process comparable to the meat industry. On top of that, a lot of the vegetables I eat have their environmental footprint as well. I do what I can but I could do a ton more, which out of convenience, I ignore. To me, this puts me in the same regards as any other person on the planet.

So where was I going with this? Guilt? I don’t need blog man to answer my email. I already know his reason for being okay with slaughtering the goats he raises. He justifies it with his own conscience by making their lives and their deaths humane. If he delved deeper he might have to come to terms with the fact they cease to exist solely because of his will. By far we don’t delve deeper, however. “God wants us to eat animals”, “Meat tastes good”, “We are top of the food chain”. We don’t think past whatever phrase we use to justify our decision. Case in point, many people are aware of factory farms and disagree greatly with their practices but don’t investigate further because it would conflict with their decision and they would no longer be capable of justifying it to themselves. Human beings, by nature, are compassionate creatures. What makes me certain that there is guilt involved? Go to a slaughter house and come out not feeling bad.

Of course, desensitization can come in to play and to that I can only reiterate that that the man in China, who has eaten dog as a delicacy for years, finds it appetizing.

Compassion has been demonstrated to me several times at the local “trade day” events. There you can buy chickens, rabbits, goats, cattle… etc. from men, that regardless of their gruff exteriors, tell stories of love for animals. Yes, the men in their overalls, spitting tobacco, gossiping, and selling chickens that they know could be fought or butchered, have several chickens, at home, that they would never sell. They have names and have somehow wormed their way in to these men’s hearts. Sit and speak to them long enough and they will affectionately tell tales of  ‘Girly” chasing after them or running off and hiding her eggs. The man with the rabbits tells stories about being present for the birth of all of his rabbits. He talks, with pride on his face, about how cute every baby rabbit is but then sells these same rabbits to people to eat. The point, no matter how twisted, is that people, all, have the capacity of love in their hearts.

My daughter, Quinn, has a friend whose parents own a deer farm. I didn’t know that people actually raised and sold deer until I met them. 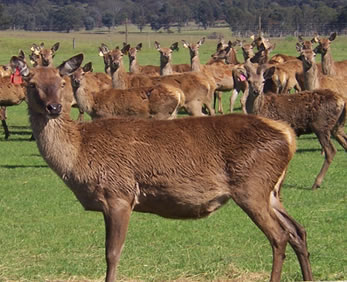 Hundreds of acres are fenced off to contain these majestic animals. However, one deer had been singled out. This deer had been named and lives in their backyard. This deer is loved. I never asked why this deer was cherished above the others, I was too busy asking questions about deer husbandry and all the various countries this man had gone hunting. (I can not express how kind he was to endure my inquisitive nature.) Later he explained to me that the children were no longer allowed in the backyard because their pet deer had attacked the youngest daughter badly enough to send her to the hospital. I was shocked. This man hunted. This man raised deer for consumption. Why would he not be rid of an animal that hospitalized his child? I don’t have an answer. Humans are complex and love is…. complicated.

Not too long ago we went to our friends, Jason and Amy’s, house. Jason hunts. Then he decapitates the animal and hangs it’s head on his wall. I don’t actually understand why it is more interesting to carry a gun and shoot an animal than it would be to carry a camera and shoot it. I could certainly blow an image of a deer head, up to life size, for him, to hang on his wall for less than it would cost to have the skin removed, placed on styrofoam and then plastic eyes inserted in the empty sockets. However, a case could be made for hunting:
1. The money from permits goes to conservation.
2. Food
3. Camaraderie
4. Competition
5. Hunting teaches self-control and respect for life.
6. There are too many deer.
7. Deer ticks carry Lyme disease.
8. Deer cause car accidents.
Of course, I can’t leave that alone and on the flip side I think a good round of golf can sustain the male ego’s need for camaraderie and competition, getting married and having children can teach self control and respect for life, the number of fawns born is directly related to nutrition and herd density so hunting to control deer populations is nonsensical, hunting does not address Lyme disease because the ticks are usually spread to humans by mice, not deer, and studies show that deer collisions actually rise with hunting season because hunting will scare the deer on to roads. However, if you are going to eat meat, I would much prefer (from my own belief system) consuming an animal that was not contained and killed cruelly is better. Of course, I refuse to pretend that every hunter has paramilitary sniper-esque skills and so the idea of an animal left to suffocate in it’s own blood until dead makes it all practically moot.

Sometimes I am forced to drive past this house. Last year, when all these coyotes were recent kills, the stench could be smelled a mile away. I can hardly fathom how the owner of this house could stand stepping outside. Plus, 20 dead coyotes seems to take away from the peace and tranquility the country has to offer. As I understand, the belief among many ranchers is, hanging the carcass of a dead coyote is suppose to be a deterrent for any other coyotes in the area to come around. The flaw in that mentality, to me, would be, there are about 20 coyotes hanging on the fence. Why did 19 other animals come around after the first one was hung? 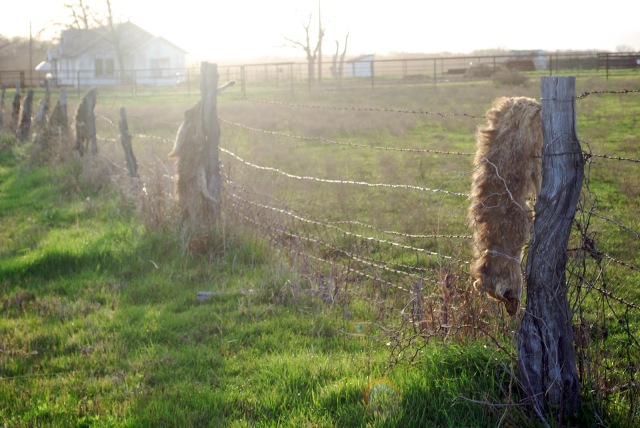 Honestly, concern for animals wasn’t the catalyst for my vegetarianism. It was for health concerns that I gave up meat. Only after I eliminated it did I have the courage to educate myself about the practices employed by the meat industry, what they do with animals that are too sick or weak to make it to the processing plant and what actually happens with the meat once the animals has been killed. Still, had my EX mother-in law not said, (and I quote) “She can’t do it. We’ll see how long that lasts” I am not sure that I could have stuck with it. Contempt can be a powerful motivator. Had she only said, “She has as much of a chance at that as she does nuclear disarmament”. Not only would I still be a vegetarian but I would have accomplished a global peace treaty within the year.

That’s it. The end. You survived my self-righteous blog. If you made it this far I would like to leave you with one last thought. I saw an animal rights bumper sticker, somewhere, that said something like- “Why is one your friend and one your food?” People of India revere the cow and the majority refuse to eat it. While some consume sea urchins in Korea, horse meat in Japan, toasted grasshoppers in Mexico, sea slugs in China, sheep’s eyes in the Middle East, haggis (sheep’s organs and entrails) in Scotland, or kidney pie in England. I simply propose that your diet has less to do with what tastes good, where you sit on the food chain, or what God has given you dominance over. It all simply has to do with the latitude and longitude of the body your soul happened to inhabit. 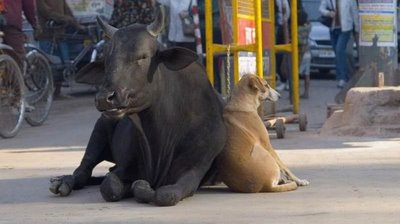