When I was 20, I got MY first dog. She was an adorable Husky mix. At 8 weeks of age she could sit, lay down, beg, and speak, on command. When I went to the vet for the first time, I reeled about the fabulous tricks my brilliant puppy knew. The vet told me, “The best pet is a dumb pet.” That was almost 20 years ago. I have since had many years of dog ownership and almost as many years  fostering dogs. I now, fully understand the wisdom that the vet dispensed to me. With that knowledge, it still surprises me, that I would want to get a pig.

A pig is ranked among the top 5 most intelligent animals on the planet and are the smartest of all domesticated animals. Here are two websites, if you are interested in learning more:

We moved in to this house in September of 2009. By that March, I was feeling fairly segregated from the epicenter of life, the city. During a speech of support, from a friend that had also decided to make the transition from city life to country life, I was told that I would like living rurally once I had farm animals to care for. It didn’t take much convincing before my husband agreed that a pig would make a great pet. When a hand painted sign, popped up down the street, a few weeks later saying “Feed Pigs- $35” we were intrigued. What could a feed pig be? Was that a specific breed? Of course, like most things in the country, it was meant to be taken literally.

A pig farm smells atrociously and the pig farm man did not seem to be amused with the city people and their inexperienced questions. The sole purpose of these animals was for consumption. You MAY decide to use one or two for breeding but even those will outgrow their usefulness and be consumed. Either way, they are destined to small enclosures to ensure that they fatten up well and with little human interaction. It is a sad life for an intelligent creature.

And so Lola came in to our life. And as any city loving, pig owner would do… she was immediately bathed… EVERY DAY for a week to remove the pig farm stench from her. For the record, a pig that has never been handled before makes a high pitched wail similar to Linda Blair in the Exorcist. Her entire life, thus far, had been spent, only seeing humans on occasion for food. Now, she was forced to endure kisses and hugs and constant petting. Suffice it to say, we kept a collar and leash on her to make it more convenient when we wanted to force our adoration. 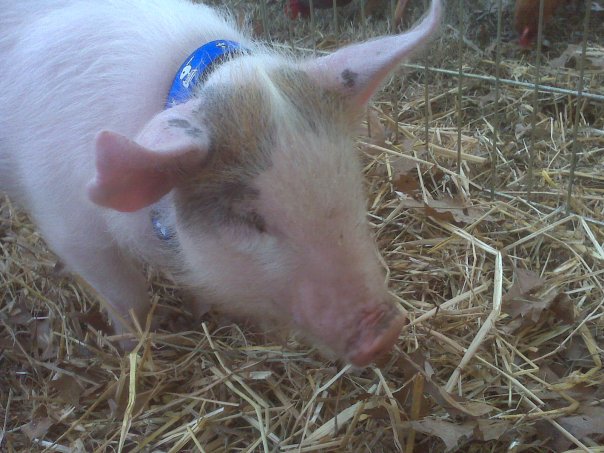 Much to my in-laws irritation, Lola was kept inside with our dogs and learned to use the dog door. At first we tried to love her in to bonding with us but what seemed to work much faster (and far easier than hugging a squirming pig) was food. Once Lola understood that we were the bearers of a quick snack she was entranced. She would follow me anywhere and I would reward her with lemon drops, cheerios, and popcorn, to do so. I am certain that the day the postman drove up to deliver the mail,  and I greeted him with a pig, and 5 chickens in tow, he passed a judgment or two. However, ducking behind a tree at that point was not an option and I knew I had to embrace my Doc Hollywood existence. (P.S. This pig used in the movie is only a few months old). 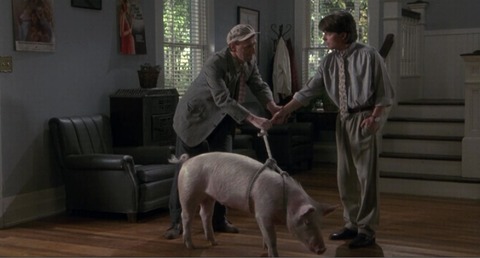 I am not sure, as a city dweller, that I had ever seen a full grown pig before moving out in to the country. They are not small animals, by any stretch of the imagination. At this time, Lola weighs close to 600 lbs and stands taller at the shoulders than my Great Dane. Suffice it to say that she has been graciously relocated from my home in to her own yard complete with a custom made house, to fit her extraordinary girth. Because of her gigantic size she has broken the pinky toe on my right foot, not once but twice. Also, as I mentioned previously, she was the cause of my husband’s three stitches to his forehead. Not amusing to me was the day that I walked out to pet Lola and she decided to flop over towards me for a belly rub, knocking me off balance, and landing her on top of my leg. I was pinned for 15 minutes before I could finally make her miserable enough to move. With all of that said,  the absolute worse thing about a pig though, is their intelligence.

Nothing is safe from a pig and a pig can be very destructive. Every gate at my home is guarded like a fortress. The only thing missing, truly, is the flaming catapult. After her first siege all gates had to be made out of steel to prevent her from bending them. After her second siege, all gates had to have a bar in front of them to prevent her from pushing them forward. Lastly, after her third siege, all gates are strapped to prevent them from moving at all. I don’t know what to do when she finally learns that she can easily bulldoze the fencing… but I don’t want to jinx myself by giving it too much thought.

One night we had an intruder in our hen house. The creature, more than likely a raccoon, burrowed under the fence in to the property and then wedged a hole, the size of a softball, in to the chicken coop. From there it grabbed, and carried off our rabbit, Foofer Doo. In the process, from shock I suspect, a chicken and a turkey both died.

We bury every animal that dies as our house. It is respectful, I feel, although a huge pain. The morning we discovered the deaths of the turkey and chicken was a maddening one. We were in a rush get the children ready and head out of the house for the entire day. There was simply no time to bury the poor creatures. Nick, in his infinite wisdom, placed them both in a plastic trash bag and left them on the drive way for us to handle when we got home.

The day was a long one, we pulled down our long drive way around 10 that night. I was tired, my husband was tired, my children were asleep in the back seat. As we approached the house, the headlights illuminated the driveway. Nothing was clearly visible, but it was apparent that the area was littered with something. Out of the corner, Lola popped her head up and grunted her greetings. She had broken through the gate and made her way over to the poor deceased chicken and turkey. What was all over the driveway were pieces and parts of their remains. (Let me interject here- I am not certain which is worse, having to clean up feet and heads and internal organs during the day time when you can visibly make out every part of the animal you are picking up OR carrying around a flashlight, illuminating, like a spotlight on an actors performance, each piece.) That night stuck with us for many months, if for no other reason than 100’s of chicken and turkey feathers clung to the fencing along the property as a daily reminder.

I tell Lola constantly that no other pig has it better than she does. She doesn’t recognize this. I informed her that all of her siblings were sold for slaughter and the pig farm down the road was forced to close thus her mother and father were slaughtered as well. I would be hard pressed to believe that she isn’t the last of her bloodline. She doesn’t care though. She has 5 acres to run at her whim. She has goats to chase and a donkey to torment. She has fresh mud to lay in and she has people to clean up the havoc that she causes. Yesterday, darling Lola, broke out again (the children undid the strap on the fence). Our neighbor called asking if we were missing our pig. With haste my husband darted down the driveway and across the road. He was told that Lola had headed towards a neighbor who is far more gun friendly than I believe necessary. At that information, Nick let out his usual pig call, “LOLAAAAAAAA”. From across the field he could hear her grunting affectionately and running. Maybe, deep down inside, she does understand how well she has it. 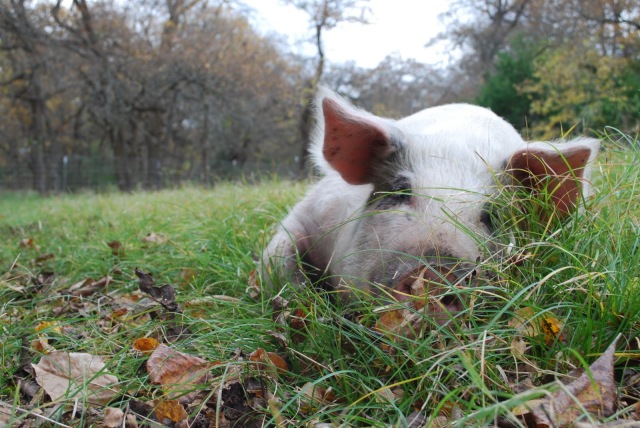